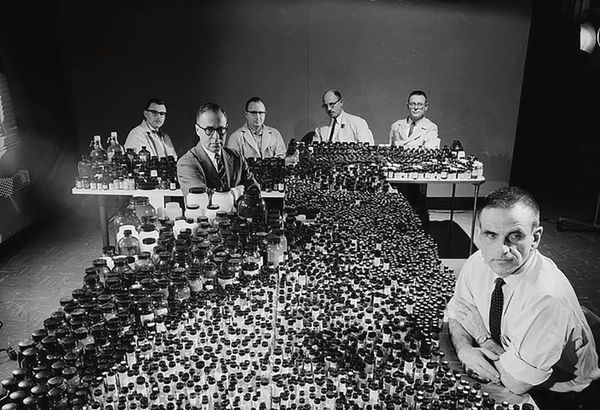 Before you dismiss your own potential or someone else’s, consider this: The man who invented instant color photography for Polaroid was a college dropout who worked at a gas station.

In 1935, Howard Rogers left Harvard because his father had lost his job and Howard felt that he “wasn’t getting enough out of college to want to work [his] way through.” So he got work pumping gas for $25/week.

That’s when he was connected with Edwin Land—the founder of Polaroid—who hired him after a single interview over ice cream sodas. Rogers saw working for Land as “a chance to learn some science and solve some problems.” Incidentally, the new job dropped his income to just $10/week. But Rogers loved it and quickly became a key figure in the company.

Following the eventual introduction of black and white Polaroid photography, Rogers asked Land if he could tackle the next step: instant color. From then, it was 15 years before the first Polaroid color film was sold. Describing the unique challenges they were encountering with the science, Land once said, “I was going to say failure, but the beauty of science, of course, is that one never fails, one only moves on to the next experiment.”

Perhaps we could cultivate a similar optimism about ourselves and others. Who is the Howard Rogers you’re overlooking?

(The details and quotations above come from the excellent book, Insisting On the Impossible, by Victor K. McElheny.)

An organization that sees potential where others overlook it is GenesysWorks, a social venture that helps teens from low-income backgrounds develop successful careers through skills training, internships, and college/career coaching.

Thousands of kids around the United States have benefitted, landing well-paid jobs at some of the biggest companies in the country. A Columbia University study estimates that $1 invested in GenesysWorks generates over $13 of economic return for its participants.

I have a lot in the works that I’m very excited to share in the weeks and months to come. For now, I’ll just ask that you pass this newsletter on to someone else if you found it worth your time.