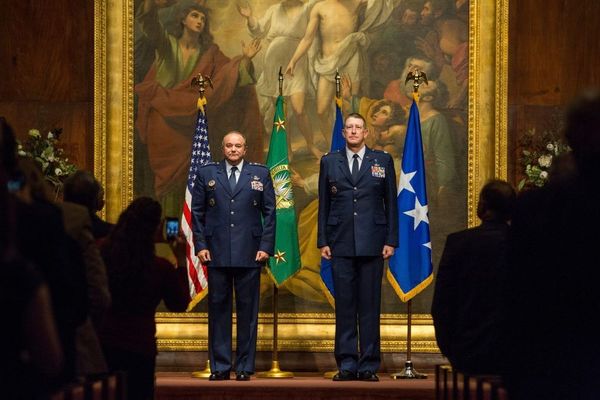 Wisdom from a chaplain

What do you know about military chaplains? Maybe your mind goes to Father Mulcahey on M.A.S.H. If so, then you need to meet my friend Chaplain George Youstra. Instead of the meek, goofy chaplain you saw on TV, imagine a 6’8” former Green Beret with a booming voice and a disarming kindness. He has a way of immediately making friends with you. It’s an uncommon feeling to trust someone so quickly that could completely dismantle you if needed.

Today was Chaplain Youstra’s retirement ceremony after 38 years serving in the military—first as an Army special operator, then as an Air Force chaplain. During his career, he advised eight different four-star generals, including General Breedlove, the former Supreme Allied Commander of NATO forces in Europe, and General Dunford, the former Chairman of the Joint Chiefs of Staff. Chaplain Youstra retired as Command Chaplain of SOCOM, the central command for units like the Navy Seals and Delta Force.

Those accomplishments are incredible, but what everyone loves about Chaplain Youstra isn’t his resumé. It’s the way he’s ministered to them. It was the late night he spent counseling a struggling couple, or the long days in the military hospital in Afghanistan, or the 386 hours he rode in F-16s—which he hated—to get fighter pilots to trust him. Chaplain Youstra wore himself out helping people.

And here’s what he taught us in his retirement ceremony: Every job is a ministry. No matter what your occupation, there are people you can help. You can listen, and comfort, and give confidence. He told us we can all be someone’s chaplain.

And I believe him. I hope you do, too. Who can you minister to?

Peace engineering is a new field of international diplomacy and development that applies engineering principles and research methods to restoring peace in regions torn apart by conflict. The work is pioneered by groups like the Peace Engineering Consortium.

If you’re interested in hearing more, you can watch this webinar by General Breedlove and Dr. Joseph Hughes that will be held on March 2.

I know I keep teasing the upcoming podcast, but it really is going to be worth your time. Chaplain Youstra is going to be one of my guests. We’ll learn all about what chaplains do, and how their work can be an example for the rest of us. I can’t wait for you to hear it.